Frequent cold chain temperature excursions afflict pharma supply chains around the world, putting patients at risk and generating intensive workflows and waste for pharma companies. The costs due to failures in temperature-controlled logistics is estimated at approximately $35 billion per year.* However, modern software infrastructure can contribute to better manage risks, reduce cost and gain control over these very specific logistics processes.

Pharma supply-chain and quality managers dream to tackle the ever-growing pain of controlling their temperature-controlled logistics processes. Looking into the future, the ideal scenario is not only to monitor the geolocation and the temperature of shipments in real-time, but also the humidity level, vibrations and potential light impact on their highly sensitive products. The perfect world would offer them a personalized online monitoring tool based on the Internet of Things (IoT) with accurate, tamper-proof and real-time data of their shipments. An additional dream feature is the functionality of alarming relevant stakeholders in case of imminent risk of temperature excursion to a highly sensitive payload. This way the team can proactively avoid excursions rather than coping with its consequences.

Can this dream become reality? The pharma logistics industry is working hard to meet these expectations. However, it takes time to establish the relevant IT infrastructure to make this happen and integrate it into standing pharma supply-chain processes. Large logistics companies with complex structures have to deal with semi-integrated legacy IT systems that are difficult to streamline towards optimal user-friendliness and transparency. Younger, innovative and more specialized temperature-controlled container providers like SkyCell were able to build a reliable, integrated and modern IT infrastructure from scratch, which allows them to stand at the forefront of technological innovation and create a competitive advantage in this field.

Data collectors rule the world. This is what we learn from the business models of Google, Facebook and other internet giants. This is not only valid for consumer data of individuals but applies to all industries around the world as well as the pharmaceutical cold-chain logistics.

The more data is collected the more accurate predictions are. If a database of real-life conditions is available, processes, routes and lanes of pharma cold chain logistics can be simulated with unprecedented accuracy. This in turn helps to mitigate risks, optimize processes, reduce the expense of corrective actions, and preserve inventory by maintaining product integrity and thereby allowing immediate product releases. 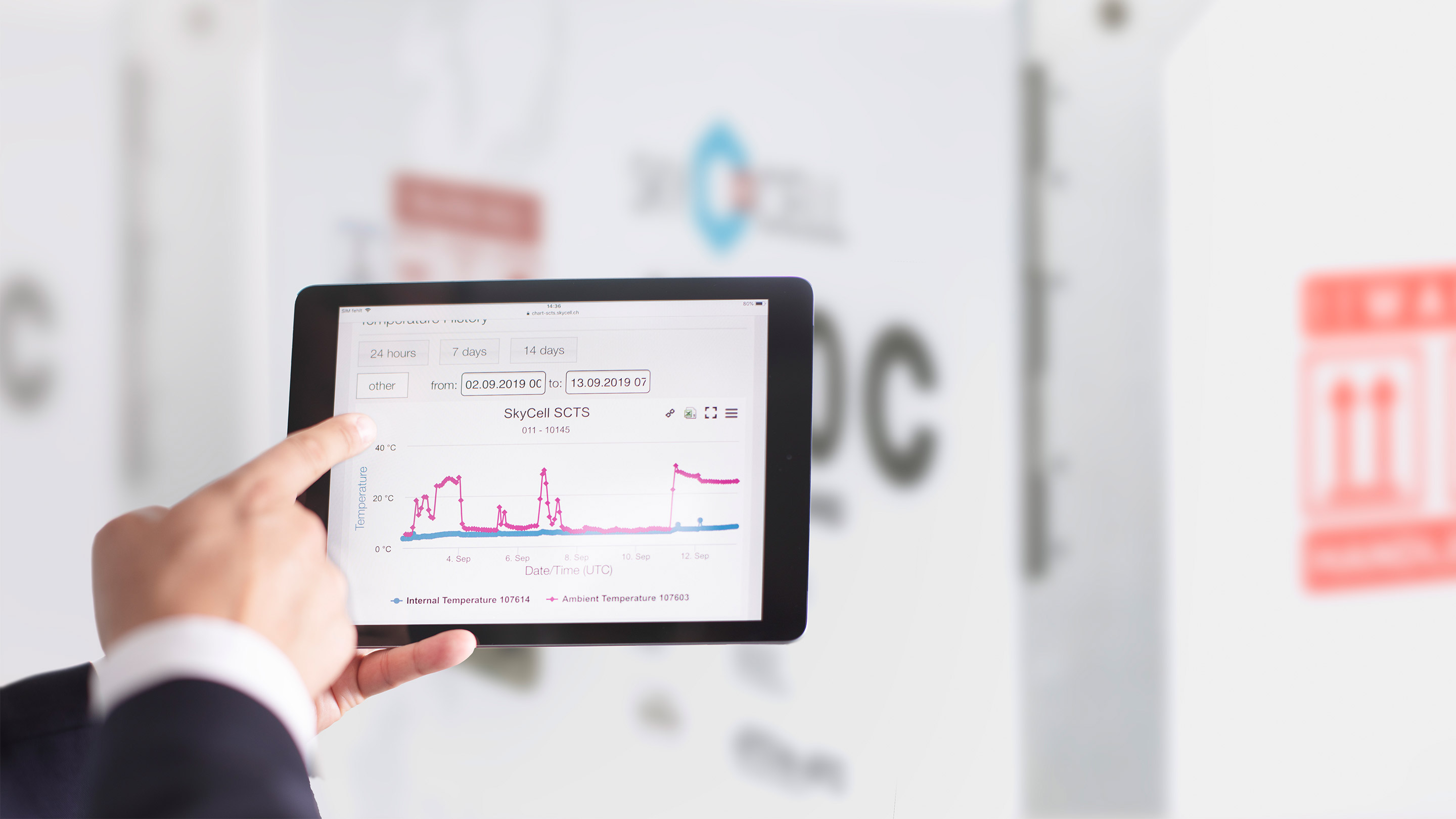 The infrastructure for this kind of services is based on the IoT and is composed of the following elements:

1. Sensors.
At least two independent sensors are required, integrated in different areas in each container that collect real-life data during a shipment lifecycle. They have to be calibrated in a regular time span according to regulation. Modern sensors are not limited to collect data on geolocation and temperature (internal and ambient) but are also able to collect data sets around vibration, humidity and light influence.

However, only collecting data is not enough. This data needs to be accessible in real-time or at least near real-time to clients, despite the limitations of the airfreight standards.

2. Making data available to the client.
SkyCell uses wireless technology that is approved by more than 60 airlines to communicate with gateways that have been set-up in over 100 airports and strategic locations around the world. While the sensors in each container collect data during the whole trip, the data is uploaded to the SkyCell database once the container passes one of the numerous gateways. This creates a near real-time visibility of the shipment status and condition as well as an alarm function if a shipment is at risk and needs an intervention by a relevant stakeholder.

This data is visible on the SkyCell online portal, which an Operations Team uses to monitor the shipments globally. The client can see the corresponding temperature graphs on the SkyCell extranet, accessible with the clients’ login credentials.

Once the container has arrived at its destination, SkyCell has conceived a mobile app, through which the sensors are read out via mobile phone wirelessly, speeding up the process in the service centers. Traditionally, sensor data needed to be downloaded from USB sticks with a USB port. New technologies make this cumbersome process superfluous.

3. Tamper-proof collection and storage of data.
This is where new and highly innovative blockchain technology becomes relevant. Since the danger of manipulation of smart devices is mounting, SkyCell has searched for an infrastructure solution to guarantee the authenticity, integrity and confidentiality of the collected data from its containers. This is achieved by equipping each container with a smart card chip that holds its own digital identity. SkyCell chose to use banking-grade hardware security modules to generate digital identities, also called keys, for each container. It gives each container a tamper-proof identity that cannot be hacked.

All the collected data is stored in physical, geo-redundant data centers based in Switzerland, which guarantees the highest level of data security and compliance. 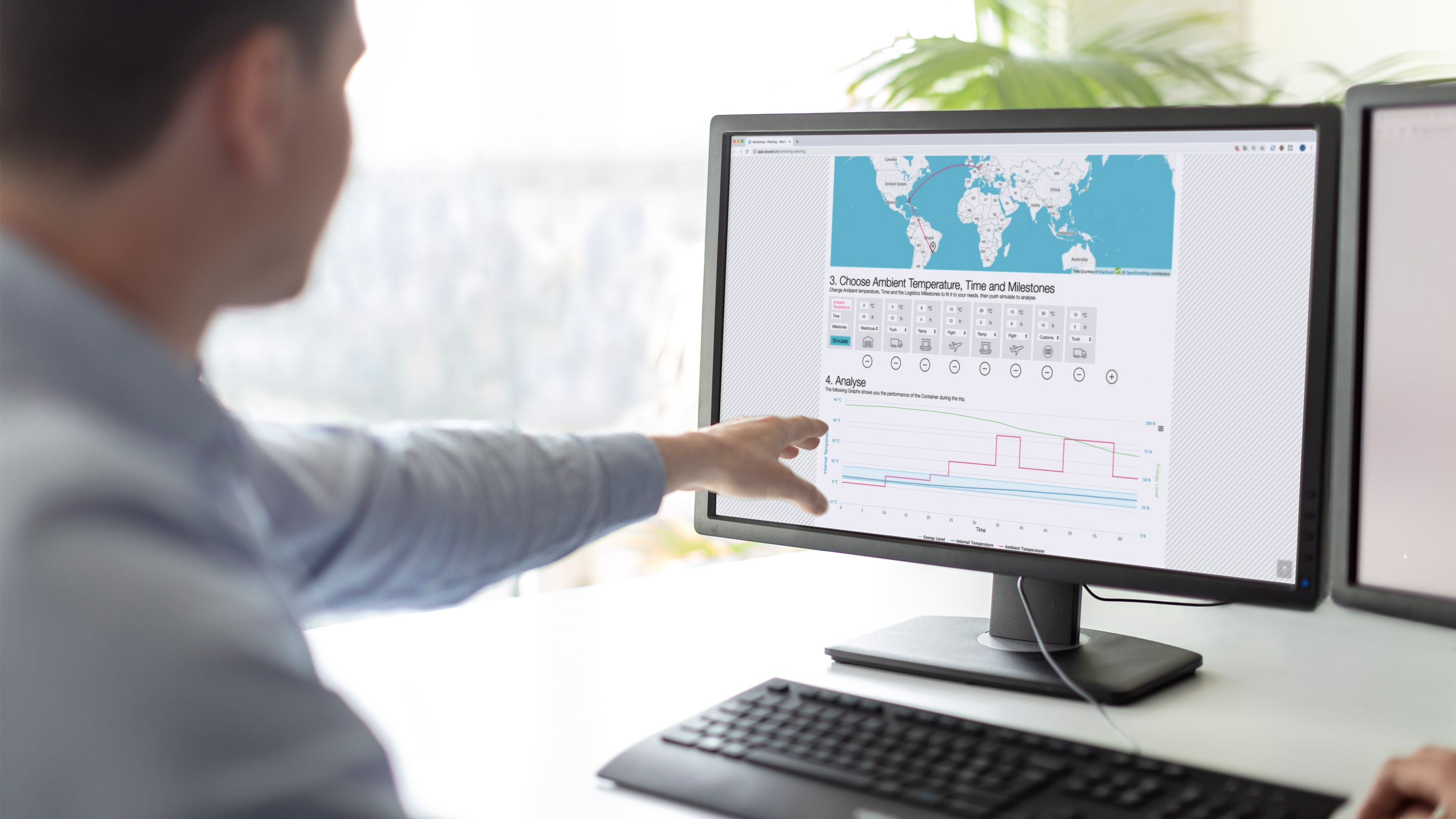 Since SkyCell has been collecting data points in this way for years, this process has created a big data infrastructure with billions of real-life data points to simulate shipments around the world. This data collection is highly valuable to clients, because one can simulate with high accuracy if it is safer to ship a parcel, for example, in August from Basel to Shanghai through Dubai or through Frankfurt – the answer is not self-evident, as Dubai as an example is more used to deal with extreme temperatures than Frankfurt. Simulation eliminates the need for test shipments and brings speed to new product implementation.

Clients are building on this data infrastructure by introducing their desired shipping route into the “SkyCell Transport Planner” accessible with their login on the website. This allows increasing the security of shipments, consequently reducing inventory and save total costs in the supply chain to a large extent.

The SkyCell IT backbone has increased security and efficiency in the temperature-controlled logistics processes, and our data has documented an extremely low 0.1% deviation in temperature over a 12-month period. This figure has been audited* by one of the Big Four audit companies. These results coupled with the possibility for insurance companies to assess risks more precisely have generated the possibility for clients to ensure a highly sensitive and expensive payload against the risk of loss. This additional element to mitigate financial risks is an industry novelty and only available because of the unprecedented accuracy and reliability of the described infrastructure. In essence, it provides complete peace of mind to pharma clients on all levels.

What will the future bring?

Temperature-controlled IoT containers in combination with Big Data infrastructure will pave the way to more secure logistics processes and consequently higher levels of product integrity. Pharma supply chain managers should push the boundaries to engage service providers that deliver “risk management as a service” through real-life data, helping them analyze and better control their risk exposure rather than dealing with the consequences of temperature excursions.

Digital integration will generate more transparency in logistics processes, consequently reducing cost and increasing patient safety. Technologies such as blockchain or artificial intelligence have only started to enter this very conservative industry. Predictive analysis based on artificial intelligence will generate even more possibilities for pharma clients. It will be interesting to see how big logistics service providers will integrate such technology leaps into their existing infrastructure, while younger, more tech- and innovation-driven players seem to focus heavily on these elements to maintain their competitive advantage.

Marrie Groeneveld is the Chief Commercial Officer of SkyCell. He has a successful 30-year track record in the contract logistics and healthcare supply chain industry with some of the largest international logistics companies, such as DHL, UPS, Movianto and Expeditors, where he served in senior and executive positions.

Unfortunately, Internet Explorer does not support all the animations and features on this website. Please switch to another browser to enjoy a flawless user experience.